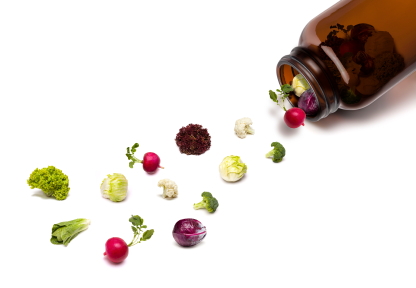 Unequivocally, nutrient insufficiency is the most common cause for the body to have a depressed immunity and become a susceptible host that falls prey to an opportunistic infectious agent. Much of the Standard American Diet (S.A.D.) is calorie rich (from sugar and fat) and nutrient poor. Traditionally, studies related to nutritional status were examined as very black or white, i.e. an individual either had severe malnutrition or was healthy. In reality, most people are in a particular shade of gray. Research is now indicating that even marginal nutrient deficiencies can severely impair immunity, moreover, just a single subclinical nutrient deficiency can have a major impact on health. For example, populations of children with marginal vitamin A status have a greater mortality and morbidity compared to populations given vitamin A supplements. The pervasive problem of marginal nutrient deficiency in America (especially among the elderly population) that is leading to weakened immunity can be resolved with simple and relatively inexpensive nutritional supplementation.

The bottom line is that we need consistent support for the immune system during the flu season. In addition to making sure you are doing your part like thoroughly washing your hands (in warm-hot water), making healthy food choices, exercising, resting, and minimizing your stress, check out the following information for nutrient support and maintaining a healthy immune system all season long.